We have class racing for the Merlin Rocket, International OK, Wayfarer and Thames A Rater classes, plus a Handicap Class of mainly Solos, RS Aero and National 12 dinghies. For younger sailors, the Topper and RS Feva classes are used.

The Merlin Rocket is the ultimate hiking dinghy for two people. It has been refined over 70 years of development and is now an extremely modern class providing excellent racing throughout the UK. At 14ft by 7ft 2ins, the modern boats are very wide compared to other classes, giving maximum righting moment when hiking, without needing a trapeze.

The earlier hull shapes were much narrower, when river sailing was a priority and many of these narrower boats are sailed at UTSC. Mainsail shapes are very distinctive, with a long top batten giving extra area high up. The rules allow for different sail plans but most new boats since the early 1990s have opted for what has become more or less a class 'standard'. A large symmetric spinnaker gives exciting reaches and allows running too - an important consideration at Upper Thames where asymmetrics find it difficult to operate.

Merlins perform extremely well on the river at UTSC with many of the club competitions regularly won by Merlin crews. Each year the club hosts a Merlin Open weekend with vintage boats racing on the Saturday and more modern designs taking part on the Sunday. UTSC regularly hosts the national Silver Tiller Opens where many of the UK's leading Merlin crews will come to race at the club. During Bourne End Week the Merlin fleet competes over three days for the National River Championships and this will see over 20 Merlins on the starts. In 2016 Upper Thames hosted the Merlin Rocket 70th anniversary celebration weekend (we also hosted the 50th and 60th), which saw many of the fleet's past champions taking part in a weekend of racing and socialising.

Upper Thames has a large and active Merlin Rocket Fleet with a with range of abilities and many of the Merlins are sailed by ever changing combinations of family members. 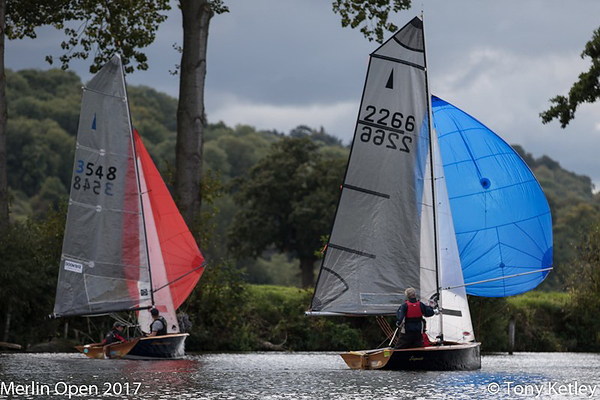 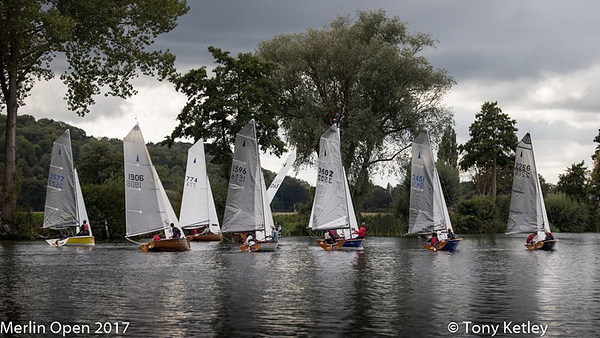 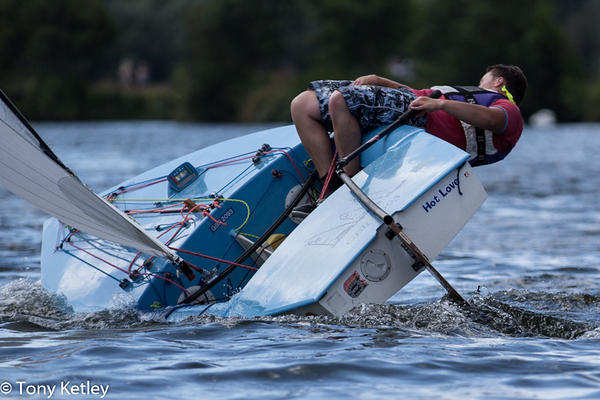 The OK dinghy is a single-handed dinghy, 4 m long with a single 8.5 square meter sail mounted on an unstayed mast on a 72 kg hull that is home built or professionally built of wood, grp or composite.

The OK has been around since 1957 and the fleet at UTSC started to form in 1976. By 1978 the fleet had reached 10 in number and moved to have its own class racing and trophies. There is OK class racing throughout the year with 4 seasonal racing series, some decided using personal handicaps to assist less experienced helms. In addition, there are numerous handicap events throughout the year.

In 2007 UTSC held the OK's 50th birthday celebration when over 30 boats fought for a place on the starting line. Whilst in current years UTSC's Bourne End Week at the end of May hosts the OK River Championships.

The OK is the club's most popular single-handed sailing dinghy with sailors of all ages from teenage to senior citizen. The club has three club boats that can be used by any club member to first try out and then to race (until, hopefully the member buys their own OK).

With all the major championships in recent years regularly attracting over 100 boats from multiple countries and continents and an influx of ex-Olympians and champions from other classes, the OK Dinghy can rightfully claim to be one of the premier international non-Olympic adult classes. With the World Championship coming to the UK in 2022, now is the perfect time to join the class and show the world what you can do on home waters against the best in the World.

Sail Club Class In comfort and in style

While the OK is attracting top sailors worldwide it is also one of the most underrated boats in the UK dinghy scene and perfect for many club sailors. While many will remember the OK as it was 'back in the day' with wooden or metal masts, the advent of the modern OK rig with carbon mast and radial sail has transformed the boat into an absolute dream to sail. Despite the apparently low boom, the deep cockpit, almost completely free of obstructions gives plenty of room for tacks and gybes and that cockpit depth means kneeling on the downwind legs will be a thing of the past. The centreboard makes launching and recovery easy and should you capsize it is in easy reach from the water, making recovery straight forward.

The third place boat at the recent World Championship was a 35 year old GRP hull fitted with an up-to-date rig and sailed by a talented sailor. If that wasn't shocking enough, two boats in the top ten were home built wood hulls from CNC kit sets. Furthermore, the class has consciously avoided the fashion for laminate sails and stayed with Dacron to avoid the short competitive life and sometimes severe shrinkage found in laminate sails in similar classes. Putting these characteristics together, an OK with a modern rig offers phenomenal long-term value and a classy, comfortable ride for the club sailor.

Please contact the OK class captain at the club okcaptain@utsc.org.uk or come down to the club and talk to any of the OK sailors there. If you're interested we can organise a trial sail in an OK for you.

There is an active UK class association, visit their website or Facebook page . This association is part of the International OK Association. 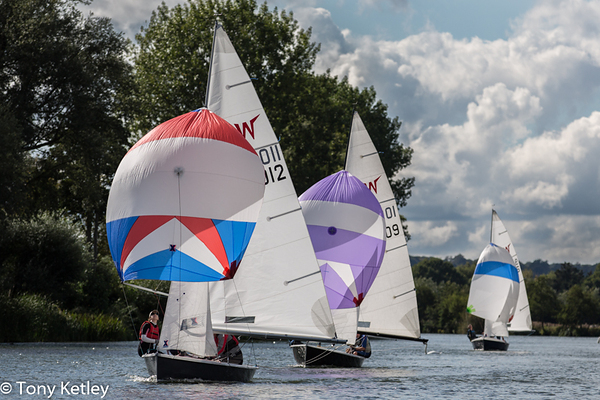 The Thames A Rater is one of the oldest boat classes still racing and is unique to the River Thames. The rating rule was adopted nationally in 1887 as the design for racing yachts of all sizes both inland and at sea. A boat's rating was calculated by multiplying the waterline length by the sail area and dividing by 6,000. This simple rule gave considerable scope to designers by way of rig, sail area, length and construction. To be a Thames A Rater a boat must have a rating of between .75 and 1 on this measurement and be sailed by a crew of three, but apart from that almost anything goes. Photographs of the early boats can be seen in the clubhouse. They were lugsail rigged; later this was replaced by gunter and in the 1920s by Bermudan. Much larger boats of up to 40 rating were built for sailing on the sea.

There are now twelve wooden boats of which eleven were built before WW1, ten GRP and one carbon-fibre. The oldest is Ulva built in 1898. Sail numbers below 14 are random and do not indicate built sequence whereas later ones do. No two boats, even from the same mould, are identical but typically the overall length is 26' with a 16' waterline. Wooden boats carry 385 sqft of sail and the newer ones 350 sqft which reduces the need for handicapping. Masts, usually carbon, are about 43' tall and the mainsail is fully battened. The result is a boat which is stunning to look at, huge fun to sail and very quick. There is nothing faster or more enjoyable on the river.

Bourne End Week regatta is the main event of the year. Here the principal race is for the Queen's Cup presented by Queen Victoria in 1893 and the only Royal Cup given to an inland sailing club. The Thames Champion Cup originated in 1887 to celebrate Queen Victoria's jubilee, and is run over eight races, some of which are also races for other cups. The usual turnout is between twelve and sixteen boats. Another popular event is the Three Rivers Race run on the Broads by Horning SC in which up to six boats participate. 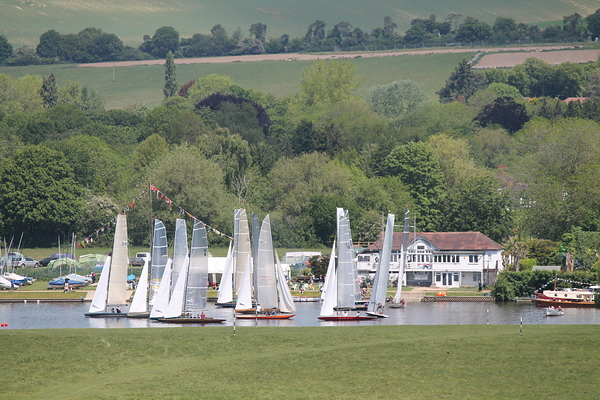 UTSC welcomes sailors of all types of dinghy and the Handicap Fleet is the home for the "orphans" in the club, sailors who have boats that are not part of the sailing classes that have regular class racing starts (Merlins, Wayfarers OKs and A Raters).

The make up of the fleet are boats that members have brought with them when they joined the club, or have found a boat that suits them better than the main classes that are sailed at the club. Several are owned by sailors who also have a boat in one of the main racing classes.

The range of boats is eclectic and includes a couple of Lasers and National 12s, together with a few Solos and an increasing number of RS Aeros. If the number of boats in any of these classes increases to a minimum of six boats, with a regular turnout of three boats in Series races, they could be eligible for their own class start.

Handicap races are held on Sunday mornings and afternoons, while the Wednesday evening series in the summer is also a handicap race (with all boats eligible). Cup races also have a Handicap class start.

For specific information on the classes mentioned above, the links to the class associations are here: