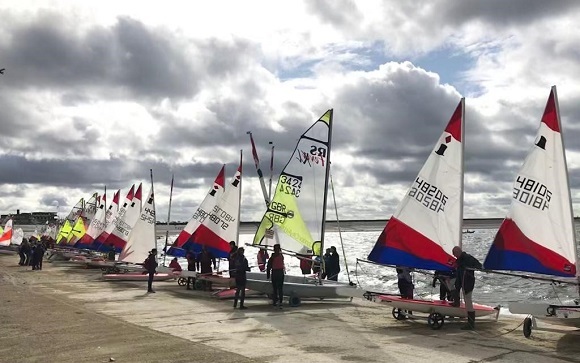 Eleven cadets raced in the RYA BYS Regional Junior Championships at the end of September. We are proud of our youngsters rising to the challenge of sailing in big fleets in big winds and coming home with smiles on their faces - well done Edward, Dan, Jude, Frankie, Kate, Tom, Freya, Dan, Rowan, Jacob.
Ollie Meadowcroft took the final honours - congratulations on becoming the London & SE Region Topper Junior Champion! Read on for the regatta report.

The Upper Thames families took seven Toppers and two Fevas to compete at this event at Datchet. Two boats joined the regatta fleet and our older and more experienced sailors joined the Championship fleet. It was a very breezy weekend with challenging conditions but with a great deal of determination they all completed all the races.

On Saturday four races back-to-back were completed before they came ashore more than four hours later. This was the longest time most of our cadets had ever spent on the water continuously, and certainly the most windy and hostile conditions. Lots of energy was spent, lots of lessons learned Jude was sure he had capsized 15 times! Needless to say a good night's sleep was had by all on the Saturday.

On the Sunday the fleet launched in similar conditions. Our sailors seemed like old hands at his already. Two more races were held to complete the six-race programme. It was a much less arduous day. Our sailors are challenged and learn a lot when they get to sail on some different waters. The competition is good and in the large fleets there is always someone to sail against.

I am delighted to say that we also won some trophies! Dan Eddison & Rowan Dunkin won the regatta fleet Feva, whilst Frankie Hackett came third in the regatta fleet Topper. In the main fleet Toppers Ollie Meadowcroft came home first from more than 50 boats, whilst Dan Meadowcroft picked up a spot prize for helping others as well as a top 10 finish.