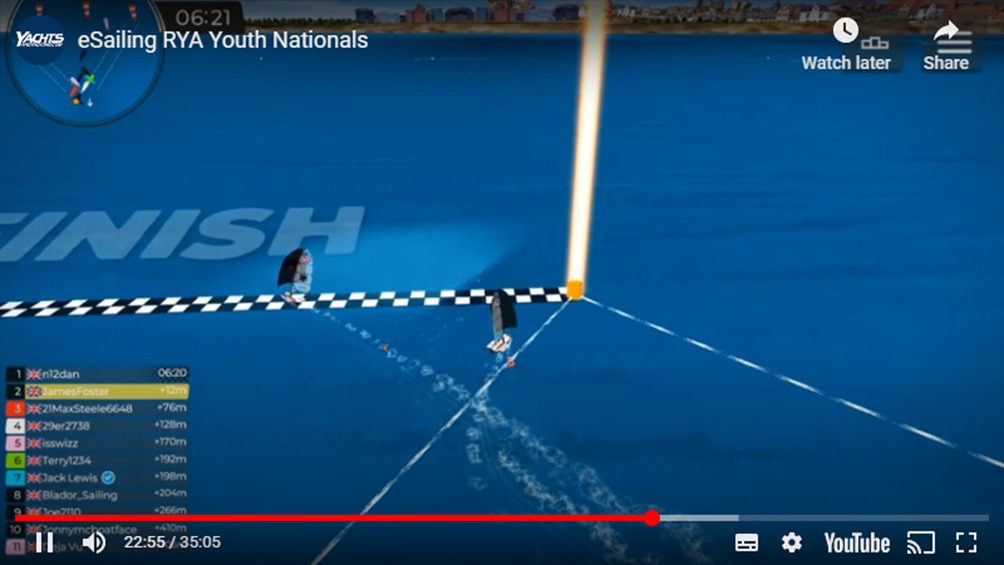 Dan and Ollie Meadowcroft and Freya Lillywhite recently took part in the RYA eSailing Youth Nationals, where over 150 sailors competed in eight qualifying groups to make it through to a final of 10 sailors. Freya was unlucky not to get through the group stage, missing out by one place, and Ollie just missed out in his semi-final, but Dan made it all the way through to the finals, which was live-streamed on the RYA's YouTube page.

The finals comprised of three races, raced in J/70, 49er, and F50 foiling catamarans. After a good first race, Dan performed exceptionally in the 49er to win the race, and then it was all down to the final race. Unfortunately, Dan received a penalty on the windward leg, which slowed him down and lost places against the other competitors. Overall, Dan took 4th place nationally, an exceptional performance for the young man. The full Yachts and Yachting report can be found here.

Watch Dan (N12dan) win his 2nd race by 2 boat lengths sailing a 49er from 16 minutes into the video clip.

The Club is also taking part in the RYA eSailing Spring Club Championships and last weekend, 14 competitors took part in the first round, to find our Club Champion. Sailing J/70 boats on a Medium Upwind course, the championships comprised of five races, with two discards being applied. Ollie Meadowcroft won three races and goes forward to the represent the club in the Regional Final, which will take place before 24th May. The actual date is yet to be confirmed, but it is hoped it will be available to watch live on the RYA's YouTube page. This was the first stage of the RYA event, with the regional champion going forward to race against the other regions in the National Finals, to be held on 30th May.

There was some close racing during the event, with John Meadowcroft and Alex Pausey both securing race wins. Dan Meadowcroft and Mark Addison both had consistent series, and there was plenty of lively conversation during the Skype call that accompanied the racing.

The Virtual Regatta App, promoted by the RYA to affiliated clubs, has proved to be a valuable distraction during these unusual times. A core group of members are using this to keep entertained and in touch with fellow members, and the club's Spring Corona Series continues on Wednesday evenings.